Through decades of surveys, the Wisconsin DNR has found the population usually peaks in years that end in 9, 0, or 1.

This spring’s drumming survey found a 6% decline in breeding males overall in the state. Drumming is the beating sound males’ wings make during mating season.

The northern half of the state saw a 7% decline. The central region saw no change. The driftless area saw a 33% increase.

Alaina Gerrits is the Assistant Upland Wildlife Ecologist with the DNR. She says that decline is nothing out of the usual.

“Now we’re just kind of going down that very characteristic downslide and it’s a typical normal thing. I think that 6% decrease isn’t anything we should be really concerned about. It’s something we were anticipating,” said Gerrits.

She said this means the population likely peaked last year or the year before.

The DNR doesn’t know for certain since it wasn’t able to the survey last spring due to the pandemic.

“It’s a little frustrating for sure because we’ve been doing these surveys for decades. To have one year missing is really atypical,” said Gerrits.

While the DNR doesn’t have the drumming surveys from last spring, it does have harvest data from last year’s hunt.

In 2020, there was an increase in harvested grouse.

“That’s kind of a piece of evidence that leads me to believe that we did peak last year,” said Gerrits. “Once we can have harvest information after this season is over in 2021, we’ll kind of be able to use that as a little bit of an index to see where the population is at as well.”

Email ThisBlogThis!Share to TwitterShare to FacebookShare to Pinterest
Labels: 2021, WI 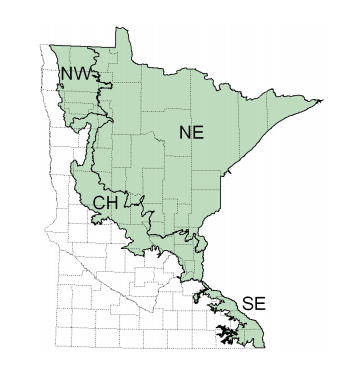 Minnesota’s ruffed grouse spring population counts are down from last year as expected during the declining phase of the species’ 10-year cycle — a predictable pattern recorded for 72 years. Although peaks vary from eight to 11 years apart, the most recent peak in the cycle occurred in 2017.

Ruffed grouse populations are surveyed by counting the number of male ruffed grouse heard drumming on established routes throughout the state’s forested regions. Drumming is a low sound produced by males as they beat their wings rapidly and in increasing frequency to signal the location of their territory. Drumming displays also attract females that are ready to begin nesting.

The spring drumming counts are an important indicator of the ruffed grouse breeding population. The number of birds present during the fall hunting season also depends upon nesting success and chick survival during the spring and summer.