Grouse and partridge seasons opened Saturday, Sept. 10, in North Dakota, and they get underway Saturday, Sept. 17, in Minnesota. Here are some notes about hunting seasons and prospects in the two states.

Ruffed grouse hunters in northwest Minnesota have cause for optimism this fall, it seems, based on brood sightings at Red Lake and Thief Lake wildlife management areas, and Beltrami Island State Forest.

“I think we are on track for a decent season – or at least I am personally optimistic,” said Charlie Tucker, manager of Red Lake Wildlife Management Area at Norris Camp, south of Roosevelt, Minn.

Staff at Thief Lake Wildlife Management Area in Marshall County echoed that optimism in a newsletter posted Friday, Sept. 9. Drumming counts on both of the WMA’s two survey routes around Thief Lake and Randen Ridge were up from 2021.

“We had a wet spring, with a record amount of precipitation in May, but we began to dry out and warm up after that,” the newsletter indicated. “Staff have been observing broods while working in the field so that is a good sign for this fall.”

“We are relatively dry around here, so that bodes well for walking on forest trails,” said Tucker, the Red Lake WMA manager. “Folks shouldn’t have any extra worries about getting vehicles stuck or anything like that.”

Walking trails within Red Lake WMA and adjacent Beltrami Island State Forest should be accessible, but because of staffing issues, maintenance on some of those trails could be “either behind schedule or nonexistent,” Tucker said.

The beginning of many upland game seasons in southern Idaho is upon us. Winter severity and spring nesting conditions influence gamebird numbers, although winter generally affects pheasants and quail more than gray partridge and our native grouse species.

The 2021-22 winter was relatively mild while spring precipitation should have provided favorable nesting and brood rearing conditions. Unfortunately, continual loss of CRP that provides important gamebird habitat in much of southeastern Idaho may reduce the number of birds available to hunters.

Two species of “forest grouse,” ruffed and dusky (aka blue), occur in southeastern Idaho. Idaho Department of Fish and Game (IDFG) harvest data over the past five years suggests reasonably stable numbers for both species. This summer I have seen numerous dusky grouse broods in the mountains north of the Snake River Plain and suspect hunters should find plenty of birds in many areas.

Number of males counted on established lek routes was higher in 2022 than 2021 in most management areas. IDFG reported that statewide populations of sage-grouse rebounded somewhat in 2022 after population lows in 2019, 2020, and 2021. Sage-grouse hunters in 2022 will have to buy a tag to hunt in any of 12 sage-grouse hunting zones. Hunters can buy up to two tags and may buy a tag for more than one zone. Sage-grouse firearm season runs Sept. 17 through Oct. 31.

IDFG states that the sage-grouse tag system is designed to limit harvest to less than 10 percent of each zone’s estimated fall population. A total of 2,510 tags were offered for 2022. The number of tags was substantially increased for 2022 even though hunters shot far fewer sage-grouse than the agency expected in 2021. To estimate fall populations, IDFG must have good data on the number of breeding females, nest success, and brood survival. This information is difficult to acquire and, to my knowledge, the agency lacks those data so their “estimate” of the fall population is likely no more than a semi-educated guess.

Chukars occur in only a few localized areas in southeastern Idaho and numbers are generally low. In contrast, gray partridge are widely distributed throughout the area. Like sharptails, this partridge is commonly found in CRP fields but I have also successfully hunted them in farmland and sagebrush habitats. Although populations fluctuate, numbers appear generally stable over the long term. I expect this year will be similar to last year.

Email ThisBlogThis!Share to TwitterShare to FacebookShare to Pinterest
Labels: 2022, ID

Email ThisBlogThis!Share to TwitterShare to FacebookShare to Pinterest
Labels: Video 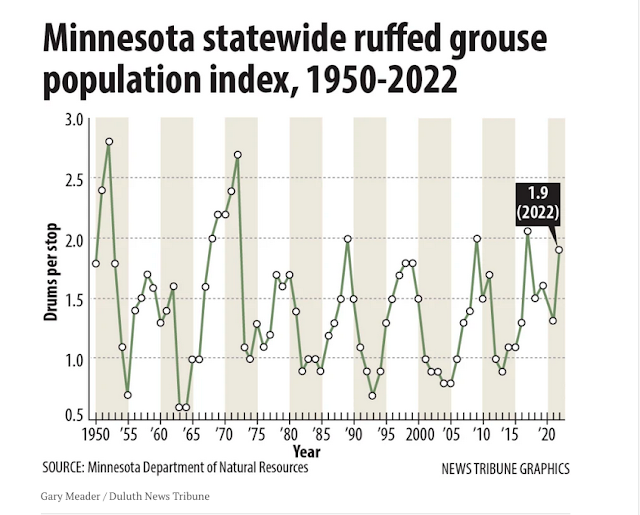 Minnesota’s ruffed grouse spring population counts are up from last year, which was not expected during the current declining phase of the 10-year cycle — a pattern recorded for 72 years.

“While ruffed grouse drumming counts are up, they are not a reliable way to predict the fall hunting season,” said Charlotte Roy, grouse project leader with the Minnesota Department of Natural Resources. “We also recorded an increase in sharp-tailed grouse in east-central Minnesota, which is positive this year but could be short-lived.”

Unexpectedly high ruffed grouse counts this year may have resulted from the warm temperatures and dry conditions last year during May and June, which favors high nest success and chick survival. Snow conditions also were favorable during winter for roosting throughout much of the core of grouse range.

The DNR and its partners use spring drumming counts to help monitor the ruffed grouse breeding population through time. Drumming is a low sound produced by males as they beat their wings rapidly and in increasing frequency to signal the location of their territory. Drumming displays also attract females that are ready to begin nesting. Ruffed grouse populations are surveyed by counting the number of male ruffed grouse heard drumming on established routes throughout the state’s forested regions.

“In a typical year, we have 16 cooperating organizations providing folks to help us count grouse drumming,” Roy said. “We are grateful to our federal and tribal partners for their assistance in completing routes.”

Historically, these spring counts were related to the fall population; however, in recent years, drumming counts have not reliably predicted the fall hunting season.

The number of birds present during the fall hunting season also depends upon nesting success and chick survival during the spring and summer. Nesting success and chick survival are influenced by many factors, including weather during May and June, which has been more extreme in recent years, and other factors, including disease and predators. This year in May and June, heavy rainfall and flooding affected much of the core of ruffed grouse range.

The ruffed grouse survey report can be found on the grouse management page of the DNR website.

Wisconsin ruffed grouse drumming down for 2022

“These results are not surprising. Ruffed grouse typically follow a 10-year population cycle,” said Brian Dhuey, DNR wildlife surveys specialist. “While we don’t have data for 2020 due to COVID-19 restrictions, we know that cycles usually peak in years ending in 9, 0 or 1. We’re likely going to see that abundance begin to wane in the coming years as we enter the down phase of the cycle.”

You can find more on wildlife surveys on the DNR's wildlife reports webpage at dnr.wisconsin.gov/topic/WildlifeHabitat/reports.htm