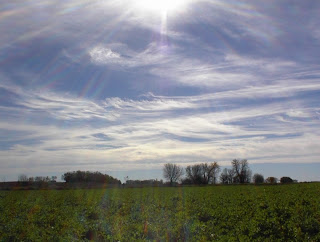 It was an interesting season. Started out hot and then switched to pretty cold over the course of a week. Not many nice 45 degree days where you didn’t have to worry about the dogs getting hot or me getting cold....

We got the most Pheasants we’ve ever gotten for a single season. Just a couple of Ruffed Grouse though.

The dogs did pretty well. Marge, English Setter, was just over 12 years old at the start of the season and held up well. She wants to hunt like she is in her prime so I have to hold her back a bit these days. Fergie, Pointer. was 10 1/2 years old and is mostly blind. She still loves to hunt and would work hard. She didn’t get as many chances at birds since I usually ran the two English Setters first and sometimes we would fill out before she would get to hunt. We would fake hunt most of the time. She did get some hen points but it was on the last hunt of the season that she got a rock solid rooster hunt so that was a blast. Tina, English Setter, turned six shortly before the season. We added her to the team two weeks before our first hunt of the season. She did really well on the grouse the one weekend that we hunted them. It was her first time on pheasants and it was a little bit of an adjustment but she came along fast and was locking them solid by the end of the season.

We hunted a fair number of different farms this fall but did have a few favorites that we hit a bit more often. The new ones were also some of the farthest ones away. One was by Springfield MN and one was by Montevideo MN. Only hunted in Minnesota this year. I used to usually hunt in three different states and hope to expand out a bit more again next year.

The big new piece of gear that I got was a Garmin Astro dog tracking unit. It worked really well and I used it to find dogs that had wandered a bit farther than usual. I think it gave me a bit more confidence to let the dogs stretch out their range a little bit farther. If I was running two dogs I used two of the tracking collars and it made it easier to follow one dog that might be working scent without having to worry about where the other dogs was at any one moment. If they were out of sound range with the remote locate on their beeper collar I would just pull out the receiver unit and it would point me in the right direction. It was a good purchase.

All in all it was a good season and the dogs had a good time and I had a blast hunting with them, which are the two most important parts of it anyway.
at January 20, 2009 No comments: 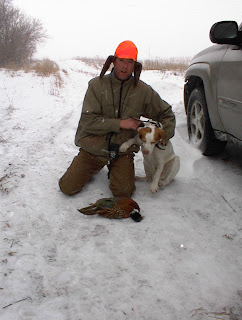 It was a long drive to Springfield MN to hunt a farm just south of town. The toughest part of the drive was just getting out of the Metro and the start of rush hour. A little bit of snow and it was down to a crawl in some areas.

This farm is two separate areas totaling about 280 acres. It was windy and about 20 degrees. On this hunt I was joined by two other hunters. Mark Leyhe, who I’ve hunted with for about a dozen years. Mark Hoekstra a high schooler who is really getting into hunting. Mark L had his Golden Retriever Sasha with him and Mark H had his young Springer, Diesel, with him. I think Diesel is under 9 months of age. I started with the two English Setters, Marge and Tina.

There was a lot more snow on the ground than 11 days earlier when I first hunted this farm. As we walked in we saw a number of birds flush. Some flushed too close to the farm house and some flushed out of range. We worked a fair amount of cover before we started to get into the birds. It was a pretty good day and the dogs all worked well. There were a few times during the day that stood out for me. The first was when we were working back to the area where we started out and Marge locked up. I was kicking around and had basically had given up an finally a nice rooster popped up. Both Mark H and I shot and dropped it cleanly. I think it was the first time Mark H had seen such a solid point. A second instance that stood out was some what similar with Tina locking up and I started to kick and nothing got up so I backed off a step and Tina went into a tiny patch of weeds covered with snow. I started to see something trying to get out and couldn’t tell what it was right away. Fortunately a big old rooster popped up and was treated to a triple hit as all three of us shot. Another thing that was fun to see was Diesel working hard for four solid hours of hunting. The little dog was working scent and pushing through the cover. It was a blast to see him so full of energy and excitement.

The final thing that made the hunt and quite frankly was a huge highlight of the whole season was hunting with Fergie. As usual she stayed in her kennel until Marge and Tina had their turn. In most instances she would get hunted on ground that we had hunted already or after we had filled out already so it would end up just being exercise. I kept Tina out to hunt with Fergie and Diesel. We went to cover some new territory and it was a fair amount of work just getting there. Watching her hunt knowing that with her blindness it was all scent, shadow, and sound that she was working off of. She was working scent a fair amount of time as we pushed through snow drifts, cattails, and thick cover. We were about an hour into our second hunt and hadn’t seen any birds within shooting range so we started to head back. While we were reworking some areas from the earlier part of the hunt Fergie locked up more solidly than she had locked up all season. Yet again, I started to stomp around what little cover I could see. Nothing. I thought it might be scent from a bird that we had moved earlier. She still didn’t budge so I went back in and started to kick even closer to her. The rooster got up less than 2 feet from her. He didn’t stand a chance. I would have emptied my gun and thrown it at the pheasant if I would have had to. I didn’t have to. Mark H and I both spanked him good. I was so excited to get that bird for her. It was the most excited I’ve been since her first point over 10 years earlier.

We ended up taking a total of six pheasants and 1 rabbit in about 4 hours of hunting. We called it a day as the snow was coming down and the wind was picking up even more. It was fun to hunt with others and to have the chance to hunt with a new hunting partner.
at January 15, 2009 No comments: